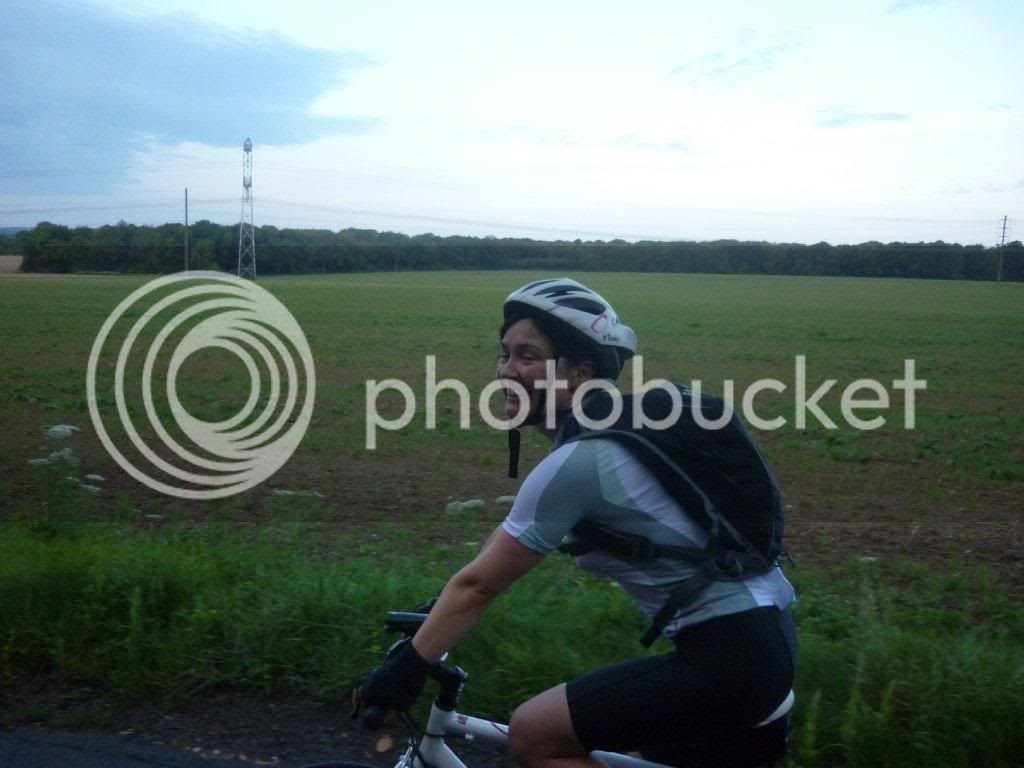 Cycling the 300 kilometres from London to Paris is generally a four to six day adventure. Traveller and her friends did it in two. We left Saturday morning at 3:30am and arrived in Paris on Sunday afternoon - sweaty, hungry and beyond thirsty.  It was a gruelling, dramatic and beautiful ride that brought an intense sense of achievement but also, unfortunately, had a rather upsetting ending. 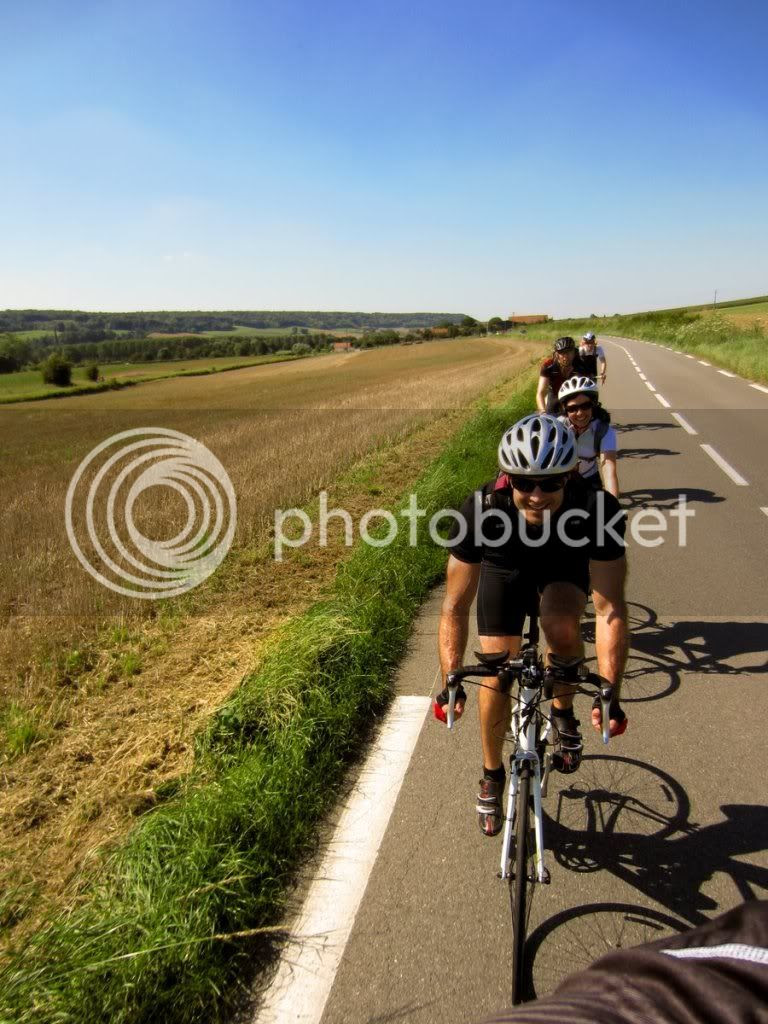 The six of us woke early on the Saturday morning {Traveller had little sleep, too excited and nervous about the day's events} and cycled just under 100 kilometres to Newhaven port to catch the ferry to Dieppe, France. Riding very early in the morning on little sleep was an interesting concept but we managed to arrive in Newhaven before schedule and indulged in a bacon and egg sarnie before jumping on the ferry.  The ferry was a four hour journey which was an excellent amount of time to sleep, eat and stretch before the riding the next 75 kilometres that were stretched out before us. One of the tremendously positive things about riding kilometre after kilometre is that you can eat pretty much whatever you want! Traveller ate almost every hour on the weekend and definitely didn't seem to put on any weight. 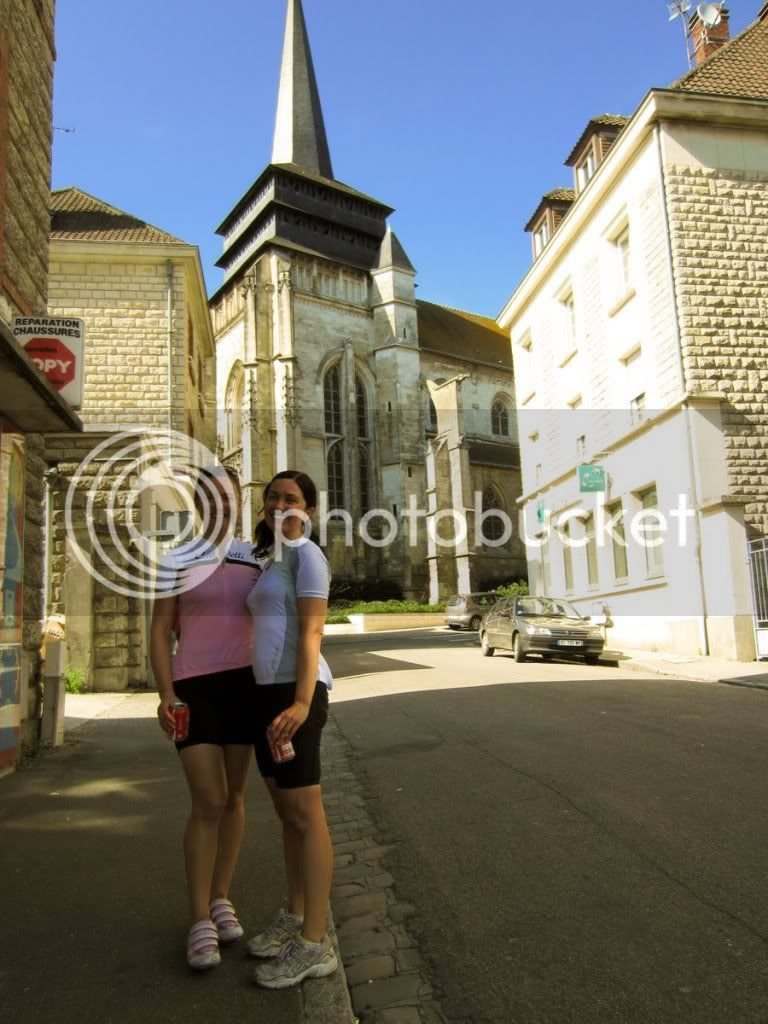 We arrived in Dieppe and were amazed by the change in weather - a mere crossing of the channel resulted in a temperature change of at least 10 degrees which was accompanied by glorious sunshine  We rode on to Gournay-en-bray {where T's legs started to feel like led - particularly by the last two hills or so!}and we were pleased to shower, eat and laugh over the day's events. 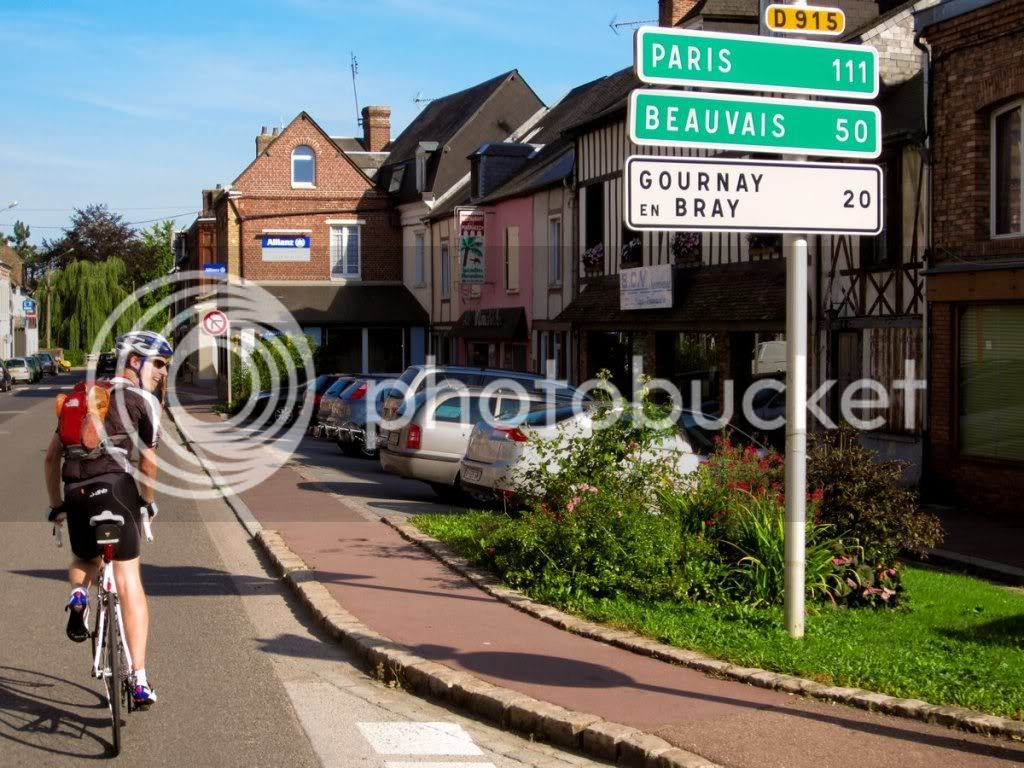 We woke early (5am) the next morning and prepared to make the final 100+ kilometres to Paris. Traveller couldn't believe how fatigued her legs were and she started to wonder if she was going to be able to keep up. We were travelling at around 28 kilometres per hour! Eating an energy bar every hour helped and soon they only had 30 kilometres to go. This was where things went awry.

We were travelling down a very steep, long, windy hill when one member of our cycling group met a car head on. He was sitting by the side of the road as Traveller came down and parts of his bike and kit were scattered down the hill. He knew fairly quickly that it was serious and, being a physiotherapist, had diagnosed himself with a shattered knee-cap and a broken pelvis. Luckily for us, a tremendously helpful Frenchman arrived on the scene moments later and, acting as our translator, he spoke to the emergency services and the police on our behalf. He even drove a couple of bikes to the hospital and helped us communicate with the hospital staff. A true gem. 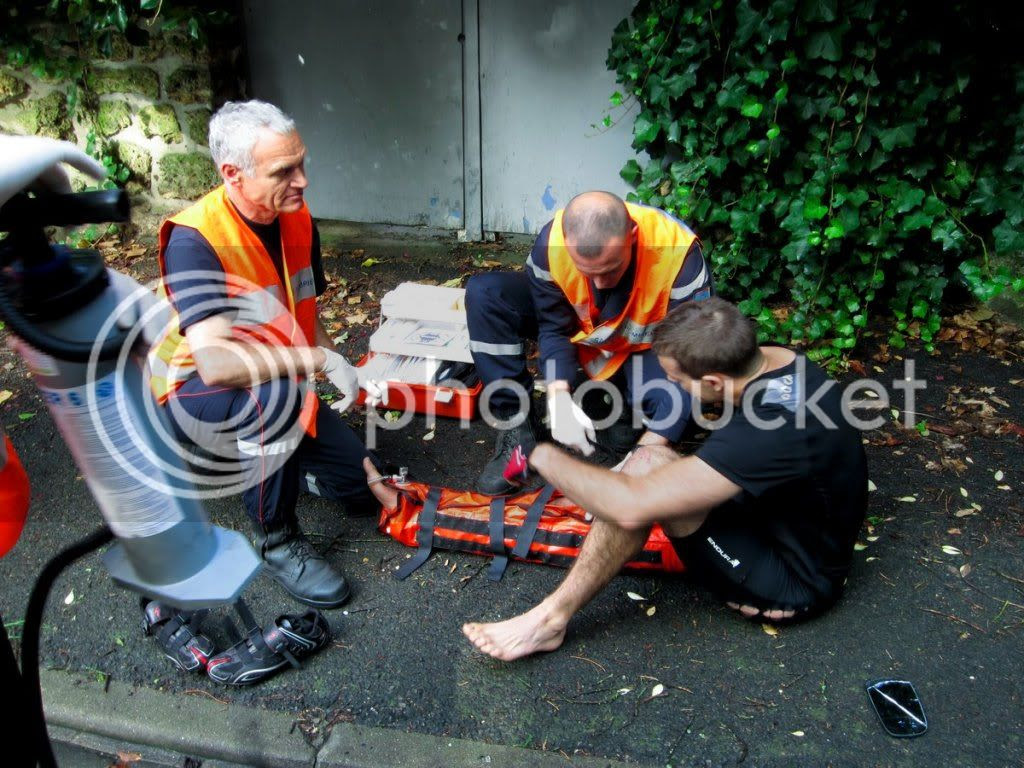 The next few hours were spent waiting anxiously at the hospital while our patient had x-rays and scans and we tried to make a series of plans, depending on a variety of outcomes. After about four hours, we were told to ride to Paris and were assured that he would probably make the trip, as they wanted him to be in London for any surgery. So, a little shaken, we cycled on. 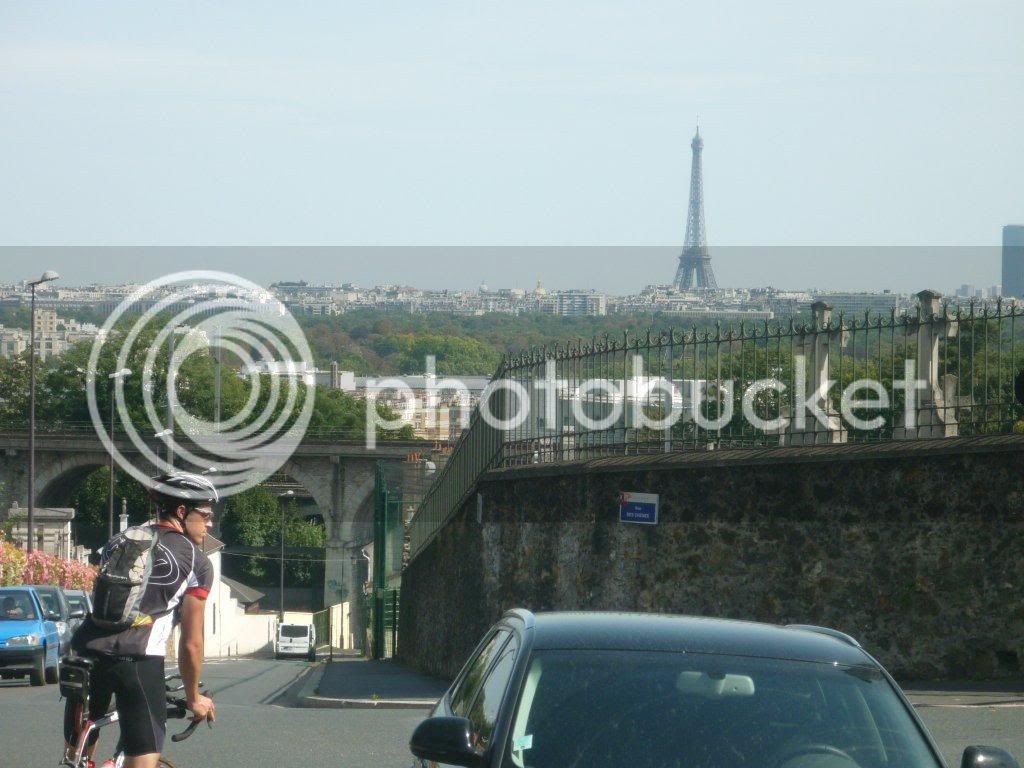 We felt sad riding without a key member of our group (he had helped organise the ride) and the rest of the journey was a little bitter-sweet. However, on catching the first glimpse of the Eiffel Tower there was still a tremendous moment of pride at having achieved such a crazy goal and when we finally reached it, there were hugs and kisses as we celebrated 300 kilometres of adventure. We also - stop reading mum and dad! -  cycled down the beautiful Champs-Elysées and around the ever-scary Arc de Triomph. Needless to say, we shared a glass of Moet {or beer in the boys' case} and the most expensive Croque Monsieur Traveller has ever bought {it was delicious though and very welcome after hours and hours of energy bars!} 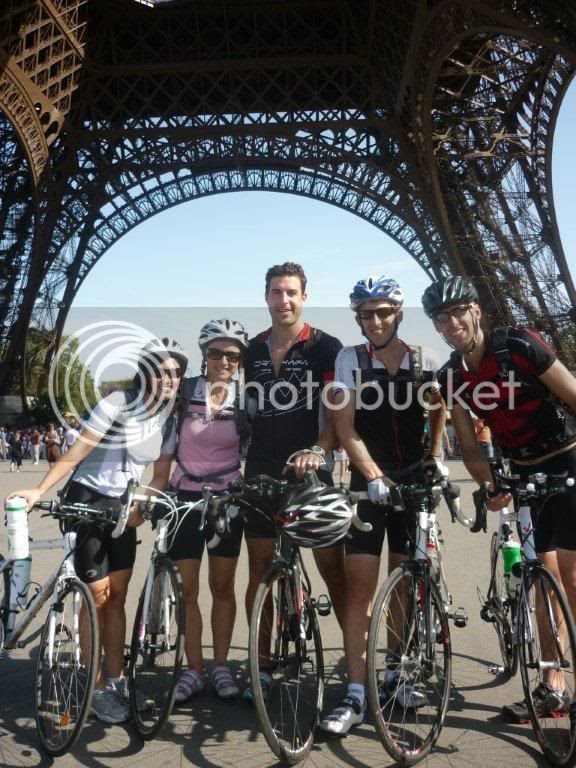 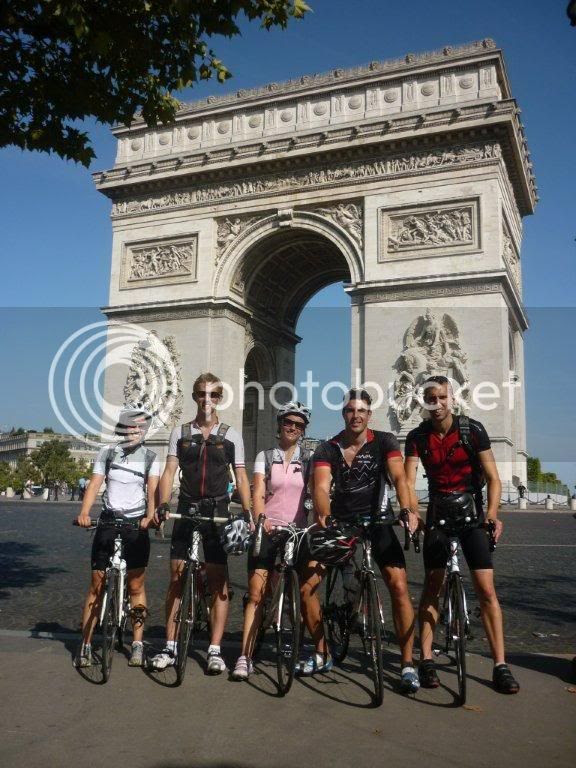 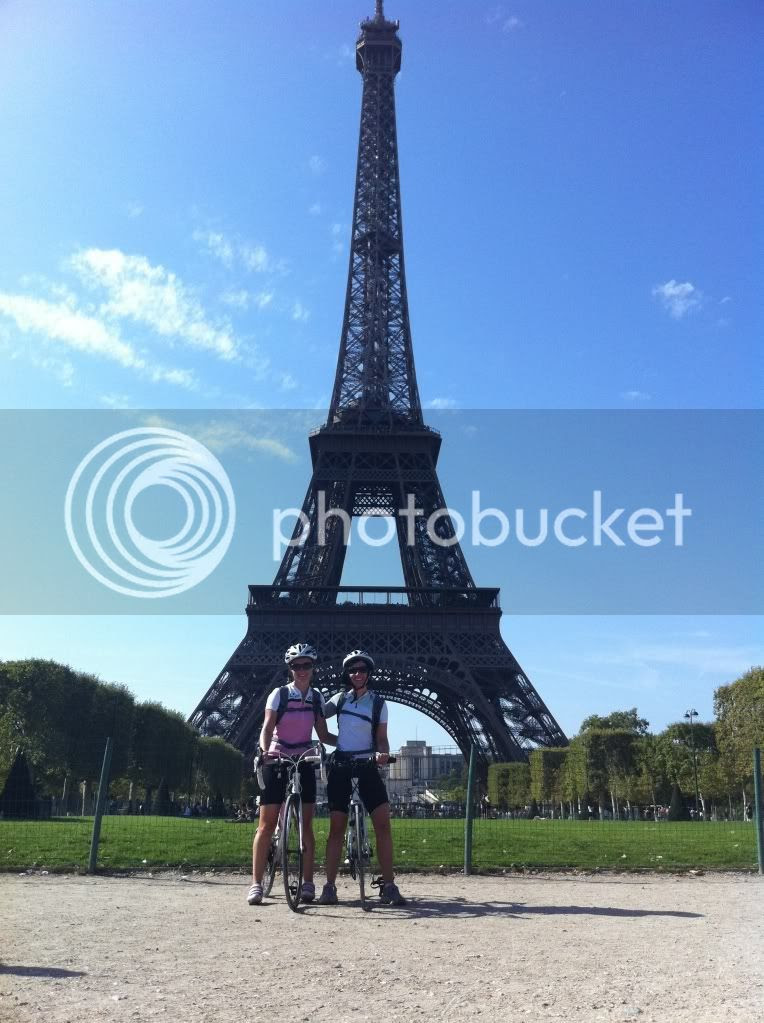 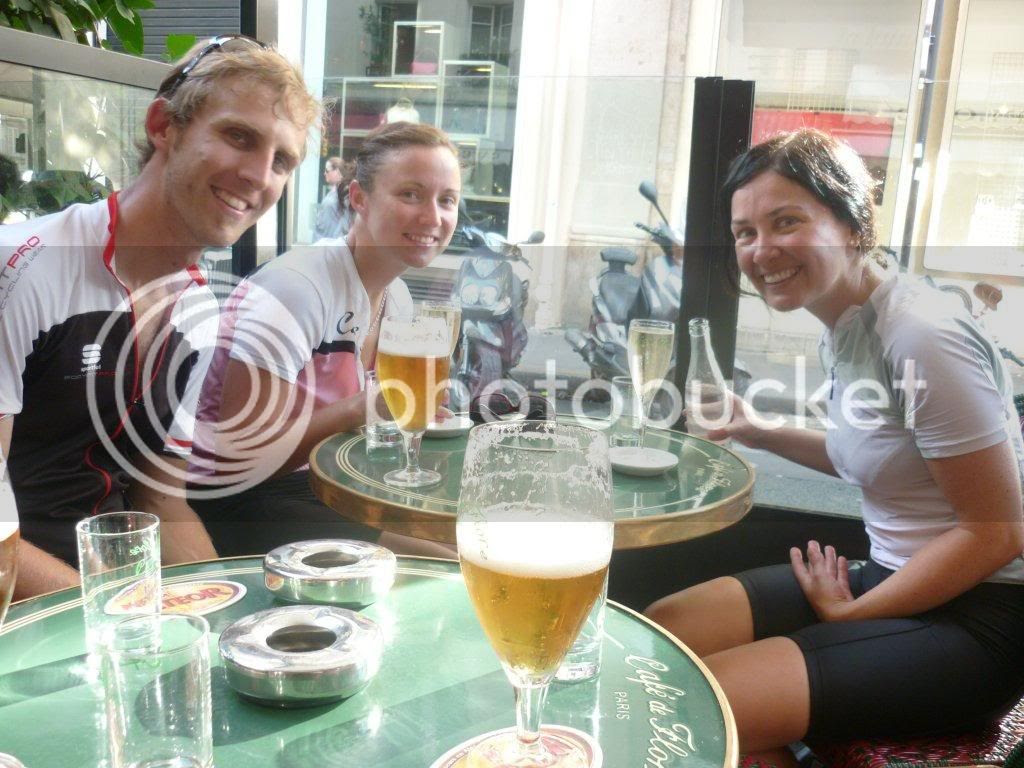 Sadly, our friend didn't make the trip home and was instead lifted by a private jet two days later to a very fancy, private London hospital on the river Thames. He had diagnosed his injuries correctly (thereby being unable to travel by train) and is now in the midst of rehabilitation. He is very positive though and has amazed us all with his consistent, cheery disposition.

So, it wasn't quite the trip we imagined but will definitely be something that we remember for a very long time. Traveller is a lucky girl to have a father like you. The love, support and understanding you have given her is cherished beyond words. T has found tremendous comfort, especially in the last year, in knowing that you {and mum} love her no matter what. December is too far away; may the months speed by!


Happy Father's Day, Dad!
I love you a billion; please take good care of yourself.
Posted by Traveller at Sunday, September 04, 2011 No comments:

Hills are the enemy. 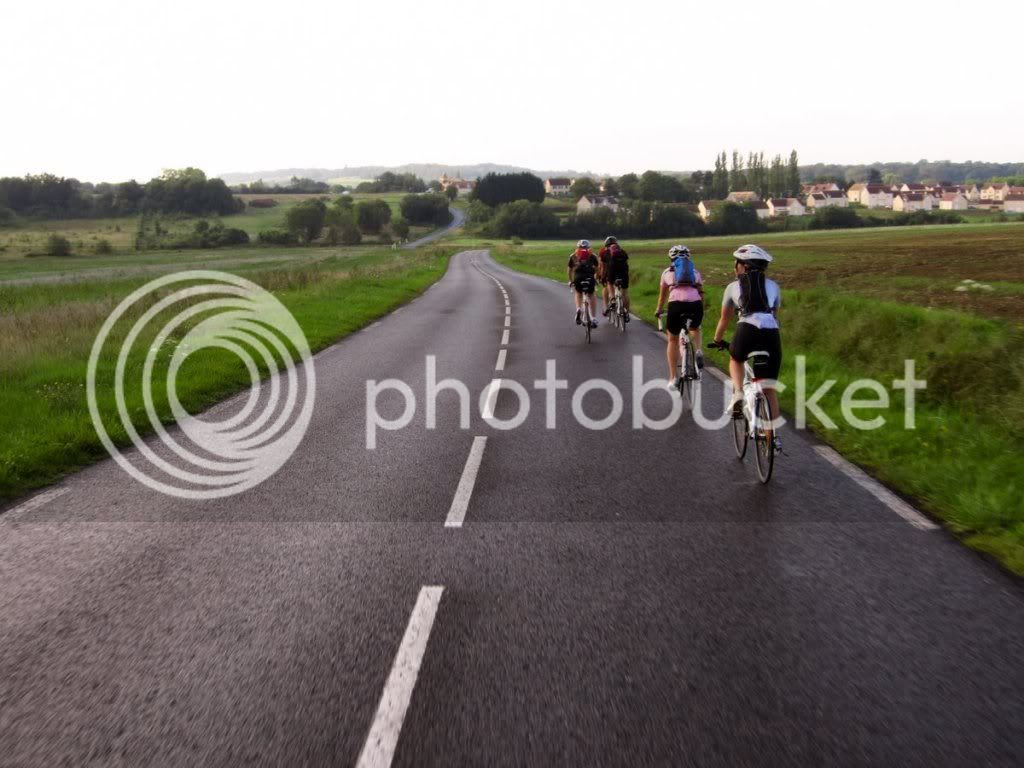 Traveller's exercising regime has evolved exponentially since arriving in London. Upon reaching these sunny shores, in an attempt to battle the Heathrow Injection, T took up running. It was a slow process to begin with; she was quite unfit and could only run a couple of laps of the local running track. Then she started on the slippery slope of entering competitions: first a 5k, then a few 10ks, then a couple of half-marathons, until finally she found a sport that required an even more ridiculous level of fitness - the triathlon. As she writes, T has only completed one sprint (mini) triathlon and is currently training for a 3/4 event which will happen in a couple of weeks.

Between the two triathlons, Traveller was preparing for something even more insane...

It all began one beautiful, sunny day in Majorca, Spain; RF's husband and another friend hatched the mad plan to ride from London to Paris. Now, before T continues, RF's husband must be explained: he is one of those peculiar breeds of human that loves to exercise; he rarely goes a day without it and is only really happy when he's pushing through some kind of pain barrier (Exhibit A: he rode through the Pyrenees while T whisked his wife off to the Greek Islands) He has been a sort-of-coach to T and RF throughout the last few years, always telling us to 'harden up' and to get moving (we have a habit of talking too much while we exercise!). So, with that in mind, you can understand that the trip to Paris would not be a luxurious, relaxing week long adventure stopping in local towns and sampling French wine and food along the way. It was going to be a hell for leather two day sprint where they would eat on the bike and stop over just once for a sleep, a shower and a nice big dinner.

Without really understanding the sheer extremity of the task before her, T, very enthusiastically, asked to join in. This resulted in a serious discussion where she was told that she could do it if she trained really hard and where she was promised that she would be left behind if she couldn't keep up. Traveller agreed to these dramatic conditions (still not really understanding) and commenced training.

So, back in May, T was given a training schedule which included four sessions of cycling a week: a one hour paced ride, an interval session, a hills session and a long ride which grew gradually from seventy kilometres to one-hundred and twenty kilometres. It all seemed possible, except T grew very busy at school, started to get sick and missed a few sessions. Quite a few sessions. Then, in July, they had a practice ride to Brighton; a 100k ride from London which involved quite a few hideous looking hills and let's just say, T did not do so well. She even had to walk up one hill. For shame! She was then told that she could still come to Paris, but she had a lot of work to do. Her schedule grew from 4 sessions a week to 6 sessions a week and totalled 400K+ of riding which translates into hours and hours of pedalling! Luckily, she was on school holidays!

Without expanding too much on the grim hours of painful, solo pedalling that ensued, T is happy to report that she did complete the training schedule and reached the level required for the Paris ride! She was, of course, nervous but felt proud that she had managed to improve her fitness so quickly.

Next up was the ride itself which did not go quite to plan...

Posted by Traveller at Thursday, September 01, 2011 No comments:

This blog follows my adventures as I live in London, and travel Europe. A few words which describe me - teacher, runner, foodie, reader, arts lover and, of course, traveller.